The Funny Side Comedy Clubs


The Funny Side first opened its doors in Covent Garden in April 2006 for a Sunday night of stand-up comedy. Ten years later and we are still going strong.

Despite being small in size, we have hosted some of the biggest comedians on the circuit - including Harry Hill, Reg D Hunter, Rhod Gilbert, Jack Whitehall, Lee Mack, Micky Flanagan, Andy Parsons, Stewart Lee, Sarah Millican, and Rob Delaney. And on one very special night in 2008, even comedy legend Robin Williams made a surprise appearance.

Owner Dave Bourn: "We've seen huge changes in the comedy landscape over the last ten years both in terms of the acts and also in the way we do business. We are very much a grassroots club and like to provide a space where acts can enjoy the performance as much as the audience. We get to see great new acts as well as being a space where established names feel they can come and experiment."

"There have been a lot of highlights over the years but nothing can top meeting Robin Williams and seeing him perform one of three warm-up gigs for his performance at Prince Charles' 60th birthday show. On Sunday 9th November 2008 seventy lucky and totally unaware people were crammed into our basement in Covent Garden when the compere announced there would be one extra act performing a special set. Robin Williams took the stage and didn't disappoint - he was a twenty minute explosion of energy no one there will ever forget."

Have a look Who's in the Gallery 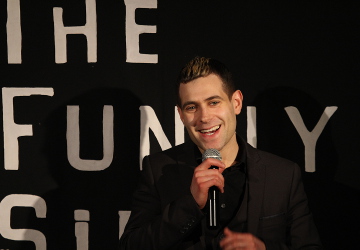