The Funny Side of Leytonstone

Otiz Cannelloni
Otiz Cannelloni combines the illusion of magic and the logic of stand-up to produce a hybrid comic creation. With a mind more suited to testing crash helmets, his performance fluctuates between sheer genius and downright stupidity. Just when you suspect he doesn't have a clue, Cannelloni removes all doubt. When this man is on stage the dressing room empties, as the rest of the comics rush to watch and learn from his mistakes. It's taken years of practice to make something so simple look so difficult.

The Just Us League
Stand-up comedians Gary Tro and Javier Jarquin unite to form the world's premier nerd-culture double act The Just Us League. Known for their energetic and engaging style, The Just Us League deliver high octane, fast paced comedy that focuses on short, punchy scenes for maximum hilarity.

Spring Day
Spring Day is a New York stand-up comedian, writer and actor previously based in Tokyo, Japan and is currently working in the UK. She was voted Brooklyn's Best Comedian in 2016. Her uniquely sharp, dark, bubbly and often brutal style of comedy is always a crowd pleaser.

Mike Sheer
Mike Sheer made his stand-up debut at a joke competition in 1985, 'defeating the other children and winning the first prize of a dollar bill'. He deals out colourful stories and strange truths with humour that jumps from light to dark. Mike is also a comic book writer, published short story writer, amateur film-maker, rapper, and actor. Originally from Toronto, Mike has shared his thoughts at clubs, pubs, events, and festivals in Australia, Canada, United States, and the UK.

Compere: Gareth Kane
Gareth has been the resident compere for most of The Funny Side's gigs since 2011 and is one of the most experienced hosts on the comedy circuit. He is also an accomplished actor and writer/performer with sketch group Harvey Garvey & the Kane who recently garnered 5 star reviews at the Edinburgh festival. Also a physical trainer and boxer, at 6'4" Gareth Kane is a man big on physique and big on talent.

Dare you play The Werewolf Game? 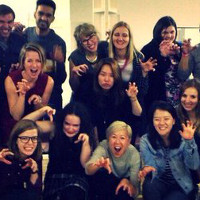